Starting with Multnoma Falls, I was able to really crank out some work in Portland. With no shortage of subject matter I set out to make a series that appealed to both locals and tourist. (I earned my way from the latter to the former)

This is Lucy. She saw me painting and thought she would come help. She told me that my table was kind of sloppy and she was going to help me tidy up a bit. I was tickled she was so determined to help in a losing battle. (my table is supposed to be sloppy)

Never the less, Lucy chipped away at the dry paint on my palate knives and peeled big chucks of dry puddles of acrylic off my table. I let her clock out early and to my surprise she returned with a purse and a fist full of 20’s.

She said ” my mom said I could by your painting!” She drove a hard bargain and I had to give her an employee discout, but when the deal was done we were the happiest people in the park! 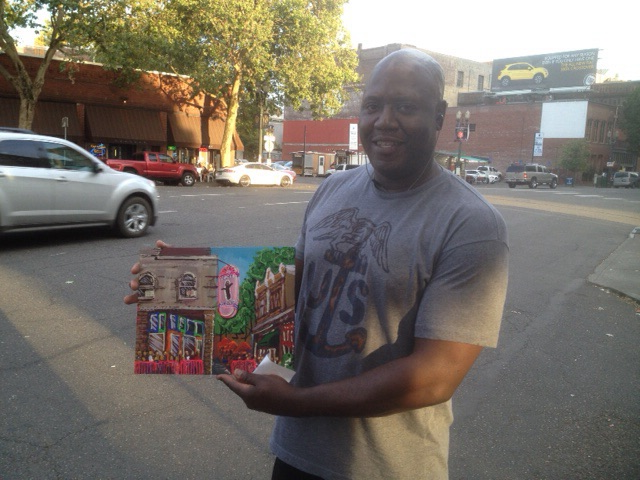 Kevin Patterson was out and about walking the streets when he wasn’t training soldiers for the Army. He said it was his last night in town and that he would like to buy my piece as a momento from his time in Portland. I gave him an Armed Forces Discount. He walked away a happy dude.

I’d like to give a shout out to Voodoo Doughnuts as well. I had never heard of them. I was just walking down the street with my paint cart, looking for something cool to paint.

Then I saw a line that literally went down the block. I liked their sign and thought the painting would be a nice little vinette. I was right. Kevin didn’t hesitate. Neither did my host Jonathan who bought the OG Voodoo that I made the night before. Two doughnut paintings both sold within minutes of completion. 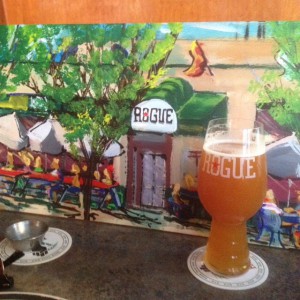 Ahhh Rogue Public Ale House! My favorite place in Portland. Ironically enough I found out about Rogue while visiting another Local brewery. I was looking for a neighborhood business that locals really dig. Rogue was the resounding answer. I set up on the sidewalk across the street and started to paint. ( I had yet to actually go inside)

Within minutes I was greeted by one of the servers, then another, then another, all curious as to what and why I was doing what I was doing. The servers were satisfied with my craving to capture local culture and rewarded me with an Ice Water with lemon, delivered, of coarse. 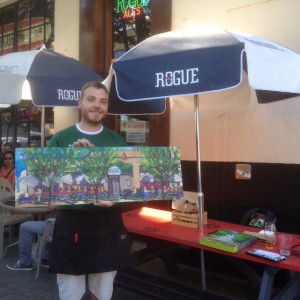 Upon completion I was invited in and was treated to an IPA, a potato soup, and a kale salad. This for me at the time was like an 8 course meal. I had yet really sell any work and was somewhat downtrodden. The staff were friendly and supportive and a few days later, on the eve of my depature, they all chipped in and bought the original. WOW. That was my Portland experience. Fantastic beer choices, beautiful scenery, and some of the nicest people on the planet! Awesome. I love Rogue and all my new friends there. Thank you!

Waterfront Park plays host to the Saturday Market (Sunday too). Thousands descend to a few tent ladened blocks near the water front. I was a renegade artist operating on the out skirts of the formal market area. This first Saturday was tough, 1000 people NO sales. Day two same difference but I saw it coming so I broke camp and painted elswhere. There were a lot of “Artists” booths in the tent city. Mostly prints for tourist or crafty type art work. It’s all good and I’m sure they were killing it. I’m not sure if I would want my work in the booth next to the “Chopstick Art” or “Dream Catchers”.

I’d rather be performing / painting and conversing with interested parties. One thing I learned from the “boothie” artists was price point. Both Local and Tourist wanted to spend like $40 not so much $400 on Art or anything else for that matter. Great lesson in “Market Art”.

I stayed in town until the following Saturday, so I could give the Market one more try. I set up by a big tree, (pieces propped up against the tree, surrounding it like ornaments) Within minutes I was greeted (nicely) by a Park Ranger on a Bike. He told me I couldn’t sell art, hand out business cards or ask for donations. I didn’t have the grounds to argue so I left. The day was young so I made a mid-game adjustment and promptly went to Starbucks in the Pearl District. There I sat for the length of a medium cup of coffe, on the sidewalk.

My paintings were bungeed to a near by tree, and a few of the smaller ones were seated with me as if they were new friends. This technique has yet to fail. I sold multiple originals to passers by. They were all locals and were pleased to see Art where they didn’t expect it. A win win situation, or as my mom likes to say ” a NO-LOSE” situation.

I left Portland a much more nimble, traveling artist.