I stayed at the Eastener after a 5 hour Flixbus Ride with a DEFEKT Bathroom.  I had mostly good experiences with flixbus throughout my stay in Europe (mostly) The problem with that is when its wrong, its WAY F-n wrong.

They don’t tell you when you buy the ticket, and they don’t care when the bus arrives and everyone including the driver is in a hurry.  What are you going to do? You wish you  would have spent the extra $30 Euros and took the Train, but at that point its too late.   So you get on the bus and deal. Whatevs, I’m in Berlin B*tch!

So now what? My Buddy B-Rad from Cali who’s been living in Germany already gave me the blue print for plein-air success.  A couple of days and a couple of awesome monuments painted.  I didn’t rent a bike (yet) because I’ve been conditioned to walk at least 7miles a day with my paintings/ and backpack.

I painted the “Brandenburg Gate” first off.  I wasn’t sure if it was proper selling spot but the 3 poliez that watched me the entire time didn’t seem to mind me making the painting.  I met a few dozen people on the way to making a pretty sweet little piece. 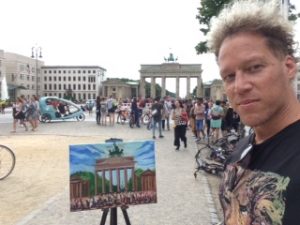 I met a nice couple from Algeria in the park and we shared some stories and a beer and they took the piece home with them just a few hours after it was completed. 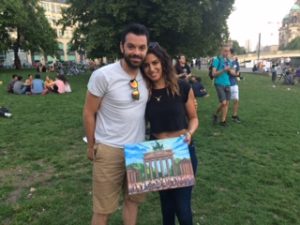 My second painting was a challenge: I wanted to paint the “Victory Column”.  I needed a proper canvas, which meant I needed a bike.  NP, rented a bike with a large basket/ investigated the map/ asked a few shop owners/ found a 3 story MONSTER of an art store: Modular.  Bought the canvas, had a beer, pedaled to the Column through the beautiful Tiergarten Park and proceeded to paint. 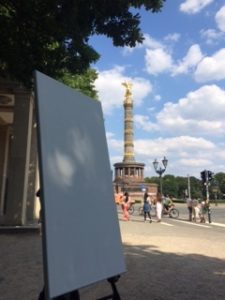 The piece came out great and would later find a home in Berlin:) Painting some of these monuments and buildings has been a fantastic challenge and great learning experience.  My third piece was small but potent rendition of the “Berliner Dom” Made from my favorite spot in Berlin.  A small park scene on the canal with local and non-local musicians and street performers sharpening their acts while entertaing the throngs of picnic-ers. 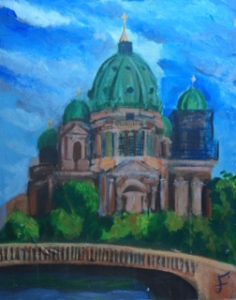 After a few days and nights in the hostel I was ready to switch to being local. Check out Berlin Part II for the conclusion…