How to  be Local in Praha…

Prague Part II: How to be a local…

The first time i was in Prague I was made an offer I couldn’t pass up! My new friend Zita said: “If you come back to Prague I  will let you stay in my flat for free…”  So I went back to Sunny Prague after 3 rainy days in Dresden.

Zita was good to her word.  Her flat was up a hill a 20min tram ride from old town / city center.  (which could be said about every District in Prague).  Always up a hill!  Being local in Prague isn’t much different that living in San Francisco.  People are fit and down to walk (fast) miles, and up hills like its no big deal.

Zita  showed me around her place and left on holiday.  Just like that I had my own pad in Prague!   All of my normal checkin/ check out / new dorm anxieties Vanished!  There was no renting of towels, smelly, noisy dorm mates, no wifi codes, or shared bathroom experience.  Just a really sweet flat, with  two balconies and a killer view.

The coffee shop downstairs (she lived on the 5th floor of a walk up) served as my office.  The first day at 10am I found out how the locals start the  day or midday anyway.  Before I could order a  coffee the girl working there presented me with  a very large beer (local lager) served in a chilled mug the size of a small bucket.

I guess in Czech people can have a morning beer and go right back to work like it never happened.  This is real: Really good beer in Czech or Prague, specifically, is cheaper than a large water.   It has to be the national beverage, I’m not even going to bother to google it.  I saw it every day. Really sophisticated women obviously going to some kind of office, just wax a few pints and then go clock in.

But Being Local in Prague was much more than walking up hills fast with seemingly endless beers.  The city is clean and has neighborhood recycling on  every  corner.  Plastic, bottles, aluminum, cardboard, and even clothing recycling bins.  The  food was good and affoardable, most meals were under $20 Euros with wine and or beer of coarse.   There is a giant church on pretty much every corner and at the top of any hour the city rings with dozens of church bells!

I allowed myself *gasp a few days off of painting/ selling paintings and just cruised.  I rode trams to non-tourists stops, walked through parks and random posh and not so posh neighborhoods.  I asked directions, advice, and smiled and greeted people like I knew them my whole life.

I finished my painting of the National Theater building at a small food festival.  The festival was on the island where i first met Zita.  I thought of it as a nice way to come full circle in Prague.  The island is sandwiched between the mega famous Charles Bridge and some other not so famous bridge.  It was constantly circled by pedal boats, tour cruises and paddle boards.  The island was full of big shade trees and provided the perfect environment for an outdoor studio;  Shade, live music, good food, cold beer, and a captive audience made of a mixture of locals and a few cool tourists.

Unlike the first time i was there, the island was teeming with people.  So I was able to paint, display and have a proper chance of selling something or at the very least maintain my role as American Ambassador of the Creative Arts.  ( I’ve actually have been telling that to people all over Europe) Next time I’ll print that on my business cards.  Though an un-official title, Being the creative ambassador is a very real responsibility.

Americans, believe it or not, are currently not that popular…. I know, I know you’d think with our perfect record of diplomatic affairs we would….Wait,  scratch that!  Of course every country has its flaws, but the American VAIL has been pulled back, revealing all of our dirty little secrets.  In the wizard of OZ the phony wizard said “pay no attention to that man behind the curtain…”  Unfortunately our “man behind the curtain”, loves the spotlight.

I’ve been in very awkward, embarrassing moments when I have to “admit”  that i’m American or “Californian” as i’ve been specific about where i’m from.   I’ve received looks that i’m certain most Americans haven’t had the pleasure of receiving. (Scorn /shame/ judgement) Between our politics and endless school shootings and mass shootings and guns and shootings and guns and shootings:  International Embarrassment is REAL.  Yeah I know, were the best! We protect the whole world and have saved every country, patriotism and proud ot be an American, and other things.  I don’t feel any of that when I’m face to face with people that have not been fed the same pro-American propaganda their whole life.  Most of the Europeans that I’ve “engaged” are not really mad or don’t seem ungrateful for the US’s  world contributions, they just have this collective “WTF are you guys doing over there, what happened to the shining light, American Dream?” Weird, weird feeling.

***I would have liked to skip this topic in both my blog and my working holiday, but it’s been a daily topic that I had to deal with…in the streets, bars, hostels, train stations, everywhere.  I don’t know whats right or wrong but I do know I’ve been taking it on the proverbial chin.

I focus on the positives and trumpet the creatives and the arts in general.  The paint on my shirt and the canvas that I’m working on serve as a diplomatic shield.  Creativity and Peace are world currency. Fortunately for me the exchange rate is in my favor.  Especially here in Prague.

My last night in Prague I went to my favorite place to watch the sunset and soak up the beautiful view of the castle on the hill.  I was hoping to bump into some of the locals I had already met from previous sunsets.  Sure enough,  I saw Alex and Eddie.  Two local creatives, one musician, one videographer currently working on a Collab.  Alex rolled the spliffs and Eddie told stories from his world travels playing endless gigs from Mexico to Africa. After sunset, we smoked and shared beers and laughs at the nearby bier garten.  I extended the invite to couch surf in SoCal to both of them and we said good bye and parted ways until the next time.

I wanted to leave a present for Zita to say thanks.  She had hinted before she left on holiday that it would be okay for me to hide a few eye sores on her sons bedroom wall:  a 3 inch pipe elbow and a capped hole from an old steam pipe.  Christian was 10 years old and his room (my room for 5 days)  was Space themed.  He already had a Star Wars poster on the same wall as the eye sores/ old fixtures.  So I turned the protruding pipe head into “Slave 1” and the capped hole served nicely as the eye of the “Death Star”.  I sprinkled a few hundred stars in the background tying everything together, and BAM!  Star Wars mural for Christian!  I left before either of them came home but i’m betting he’ll be stoked.

Prague as a tourist was cool but as a local Prague offered much more! I look forward to going back as either… 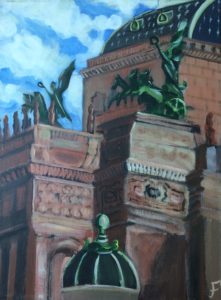 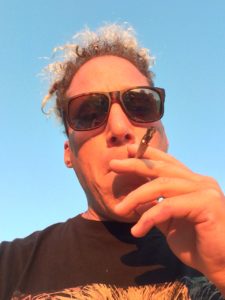 Prague: Part II “How to be Local”